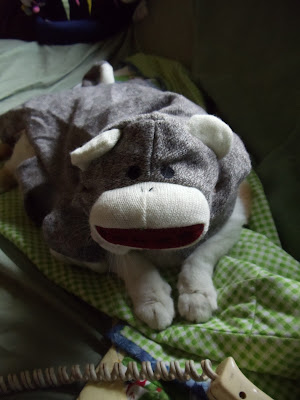 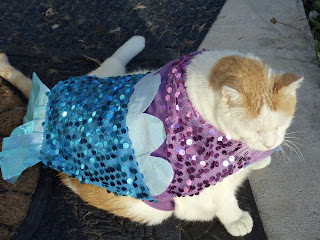 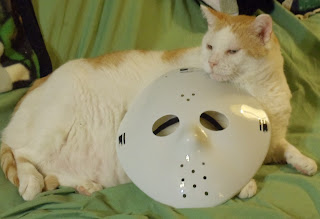 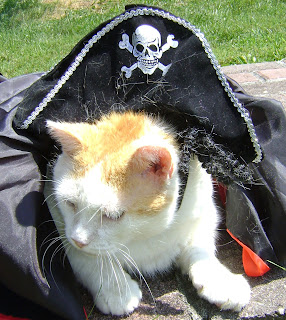 With Flora safely and I devoutly hoped securely in the carrier, the next question was, "Which cat to try for next? Who would be greedy enough to go for treats when fleeing would be the best option?"


Actually, there were two choices:  Elmer and Ellen.  Elmer just happened to be closer.

As I drove to the vet's, I kept glancing in my rearview mirror to see if there was an emergency vehicle following me or if it was just Flora doing her imitation of a siren.

I made it to Jones Animal Hospital and signed in.  They were sweet as always, apologizing because I would have to wait since I didn't have an appointment.  I figure that's the price I pay for not getting an appointment but since my ability to catch cats at one appointed time is iffy at best, I usually go the drop in route.  Besides, the one time I called for an appointment, Elmer apparently heard  his name mentioned and the cat I thought totally preoccupied with birdwatching bolted from the room and headed for parts unknown.

At least that taught me that Elmer does indeed know his name.  I had my doubts.

We settled in the waiting area, or rather I settled, Elmer cowered and Flora alternated between howls and growls.

I opened the carrier and tried to comfort them both.  I had no takers.

As usually happens, I saw someone I knew there.  We'll call him Mr. Smith.  He's a very nice gentleman who has been on our Library Board.  He ambled over to say hello, explained he was picking up something for his Goldens, and reached in to pet Flora who was making sounds like gravels grinding.

I think I answered in the affirmative.  I was too busy holding my breath, hoping she wouldn't slice and dice him.  She tends to be more sound and fury but cornered in a box, I wasn't sure.

I dragged my carcase out of bed that fine (well, cold and blustery, but I didn't have to go to work so we'll stay with "fine") Friday morning, longing for a cup of coffee and for cats to stay out from under my feet long enough to get one.  After I distributed bowls of food indoors and outdoors, trying not to step on Ellen who turns into velcro-kitty when it appears anyone is close enough to the refrigerator to open the magic cold box and take out deli turkey, I realized Flora was deeply absorbed in chowing down.  I slipped downstairs and brought a cat carrier up to the kitchen, out of sight.  Then s l o w l y  but nonchalantly approached her, picked her up as if for a nice little cuddle and headed for the box.

Of course, she knew sometheing was amiss so she started to scrabble but I popped her in the box and locked the lid.

It was then I became aware of something that sounded like the rumble of a distant volcano due to erupt.

I realized it was Flora, growling.

This did not bode well. 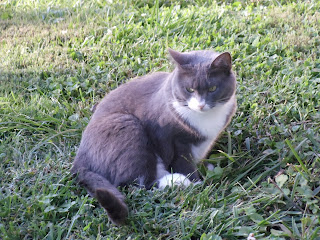 Posted by teaberry at 1:50 PM No comments:

When I feel that first nip in the air, a sense of dread comes over me.  A sense of doom.  Yes, I hate the ice and snow and cold, but more than that it portends an annual event guaranteed to cause sleepless nights, tossing and turning, scheming and plotting.

It's time for Nuit and her kittens to go to the vet for annual shots and exams.

When Nuit brought her amazing exploding kittens to my doorstep, their four week old legs still tottering a bit, I didn't realize what I took for a phase would turn into a way of life for most of them.

Flora Belle Snicklefritz is that most dangerous of characters, a cat who is agile, strong, smart, and, above all, suspicious. 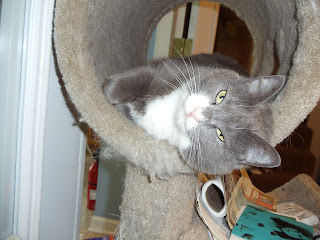 I once saw a painting by a Chinese artist which I was quite taken with and considering splurging for. It was a grey mother cat and her kittens under a willow tree.  The mother had slitted eyes and laid back ears, and other people said it looked like a demon cat.  I knew they were sort of right, because to me it looked very much like Flora.

In her defense, she isn't a demon.

But I will admit that she does have a certain glint in her eyes....

Stay tuned for the Ordeal of October.

Posted by teaberry at 6:04 PM No comments:

Elmer: What's in a name?

As a young rascal, I thought perhaps Elmer should be named Arthur.  A bit more regal, or at least a bit more distinguished.  Mom, wise cat woman that she was, said he was more of an Elmer. And when he gets after poor Bonnie Kate, the tiny gentle fuzz ball,  his name is "ELMER-LEAVE-BONNIE-ALONE!"

Mom and were both wrong about his name, really.  I just was more wrong. He isn't any sort of dignified Arthur.

Elmer is actually the feline incarnation of Jethro Bodine.  Handsome, well-built, and with a secret dream of bein' a rocket scientist or a brain surgeon or one of them double-ought spies.

We need an Uncle Jed needs to have a long talk with that boy.

But I love him anyway.

Most of the time, at least.

Posted by teaberry at 5:59 PM No comments: 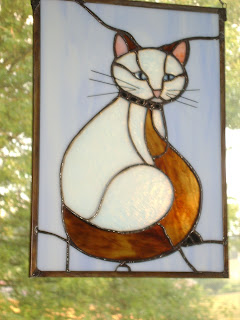 This is Bonnie as a stained glass figure.  I saw the pattern at a glass shop in town (now closed) and took photos of Bonnie for the older lady to work with.  I admit when I first saw it I was a bit disappointed:  they missed Bonnie's mask. But it's beautiful and elegant like my girl, so I'm happy.

Hmmm.... I may have to do a whole "art of my cats" series, even if some of the art isn't really of my cats.

Posted by teaberry at 9:08 PM No comments:

Why I Had to Buy This Tile 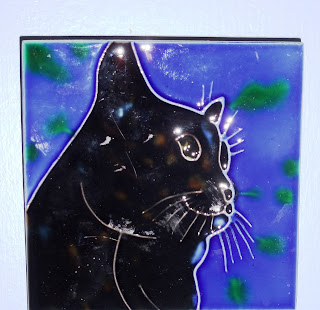 Chubby-cheeked grey cat (this photo looks more black).  Pretty ordinary.  So why did I buy it?
I don't know.  Maybe Ellen knows.
Posted by teaberry at 10:35 PM No comments: